Thoughts are the shadows of our feelings - always darker, emptier and simpler. Nietzsche 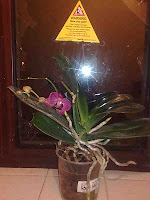 I was ill with flu and cold sweats so didn't really leave my bed for about 24 hours. I had various bits of delirium in semi-awake states. I also experienced what I refer to as a "building dream" - haven't had one of these in a fairly long while.

I wanted to be alone and to study so I headed into what I thought was a derelict building.

I wondered around dark passages in a labyrinthine bunker for what seemed like some time before coming to a door marked "IV". I opened the door and decided this windowless room would be ideal for my purposes, it had electrics, running water and a huge table to work at.

I magically installed my bed and computer - they winked into existence.

I had loads of papers and folders around me and was sat down to work but was disturbed by the bleep of a type of police radio. Two women came in, one in uniform and the other not, she just looking like a professional. They saw my bed, me, my computer and the one in charge said, "I think we can turn a blind eye to that."

At this stage I began to wonder exactly where I was so went for an explore - it had turned daylight by now and the place had come to life. There were convicts and staff everywhere. I was stopped, queried and replied, "I'm a civilian". Some of the convicts had a fight but nobody really stopped them.

There were signs of industry everywhere and in the near distance I could see the vast prison being expanded still further. I wanted to leave and kept coming to station after rail station, all named for obscure little English towns I'd heard of but had never been.

I finally reached a station with unattended barriers that I thought I could escape from. I was carrying my paper work in files but I kept on dropping it in the mud. I realised I'd left my computer behind and it probably wouldn't be safe in a prison - I kept reaching more and more prison building sites but was completely separated from my computer and my new base.

This is what my sub-conscious mind seemed to construct as it interpreted my reality on this given day. This is my desire to be left to try to work in peace so I can make myself free and my increasing disengagement from the world around me, my perception of it.
Posted by Coconut Clapping Party at 15:59 0 comments